Ali Shah believes it’s time for social media to return to its roots.

“The concept is not about keeping you engaged on the platform or sending you content that keeps you on the site longer. The goal is actually to allow people to network and connect in a meaningful way,” said the Kincardine-based digital analytics expert.

Shah is the founder and CEO of TapeReal, a social media app he created from his home office in Kincardine.

It’s a cross between TikTok and YouTube, where Shah says privacy and creativity are key. He says there’s no algorithms, no screen recording, just a place for people to share videos about things they’re passionate about. An added bonus he says, is creators can monetize their content.

“We want to empower anyone to able to create, and of course, artists, musicians, educators, anyone who has knowledge can come on this platform,” he said. 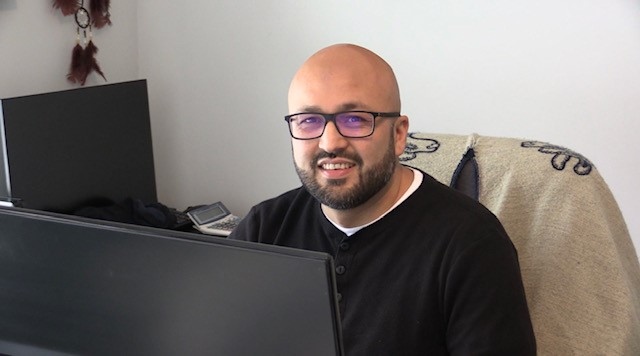 Ali Shah, founder of Tape Real, Dec. 10, 2021. (Scott Miller / CTV News)
Shah is originally from Toronto, but ended up in Kincardine, because of the worldwide movement towards remote work, meaning he could build his app within minutes of Lake Huron.

“Pre-pandemic, the tech ecosystem was all siloed up in big cities, but now with remote work, there’s the ability to work from home or wherever you are. I think it’s important for the tech ecosystem to spread out and into smaller towns and cities,” he said.

The app is free but Shah makes money through subscriptions and app-based currency, which creators can leverage to provide users exclusive content.

Shah is currently embarking on an equity crowdfunding campaign to raise money to grow the company beyond his home office in Kincardine, although he plans to keep TapeReal based out of his new Bruce County home.

You can check out Bruce County’s contribution to the world of social media here.

This 22-Year-Old Builds Chips in His Parents’ Garage

This 22-Year-Old Builds Chips in His Parents’ Garage