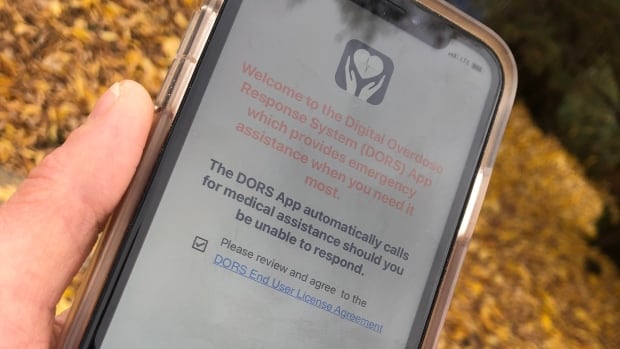 As concerns grow about a made-in-Alberta mobile app aimed at curbing drug overdose deaths, the government says it has full confidence in the platform and its developers.

Questioning the tool are a Calgary-based app developer, harm reduction advocates and a group of mothers who have lost children to overdoses.

It is currently available in Edmonton, Calgary and surrounding areas.

Vince O’Gorman, CEO of Vog App Developers, said the app is a failure.He reviewed the tool with The Canadian Press and highlighted problems with its user interface, location tracking and design.

“My professional opinion is this app was poorly constructed,” said O’Gorman.

He said he encountered a handful of glitches while installing the app and said the user interface was poorly executed.

A major concern is the app does not use web mapping, which allows for more accurate location pinpointing — crucial when someone is potentially overdosing.

Limited data has been made available on the app’s effectiveness.

Eric Engler, press secretary to Mike Ellis, associate minister of mental health and addictions, said the app has been downloaded 650 times and has 230 registered users. It’s unclear how many active users there are.

DORS was developed by Aware360. The province budgeted $325,000 for testing and development. Ongoing operational costs aren’t expected to be calculated until next year.

‘Does this save lives?’

Engler said the company is a leader in this type of monitoring technology and the province has full confidence in the app. He said emergency service providers, people with lived experience and addictions physicians were consulted.

“Users can provide their feedback through an in-app survey and Aware360 will continue building a better application for Albertans,” he said in a statement.

Petra Shulz, co-founder of Moms Stop The Harm, a national advocacy group that pushes for drug policy reform, said she won’t recommend the Alberta app until the province releases details on its effectiveness and security.

“Every extra tool in our tool box is great, but when it’s a life-and-death situation, we want to know the tool is doing what it is designed to do. We want to see the evidence,” said Shulz.

“The key question is: Does this save lives?”

She said her group recommends using Lifeguard and the national Brave app, because they are proven and treat people who use drugs with “love, care and respect.”

Alberta has been facing record-setting drug poisoning deaths. More than 1,000 people died between January and August.

The government uses recovery-focused care and has been criticized for limiting access to supervised consumption sites and injectable opioid agonist therapy.

The province has declined repeated requests about whether its DORS app has saved lives.

“As it is a confidential and anonymous service, we will not be commenting any further on usage at this time,” said Engler.

Alberta-based addictions specialist Dr. Monty Ghosh, who was involved in the app’s development, said there have been callouts to emergency services for resuscitation of people using the app.

It’s clear the app is working, he said, but added nothing is perfect.

“It’s just the first iteration. I’m almost certain that there will be further iterations,” said Ghosh. He also said it will take time to develop trust with the target community.

Jeff Hardy, founder of Lifeguard, said transparency is key to gaining public trust and ensuring users of an app feel safe. His company makes public how many lives have been saved because of Lifeguard.

The current total is 43, he said, and no one has died while using it.

“It’s important for people to feel comfortable that if they are actually going to put their lives in Lifeguard’s hands that it does actually save lives,” said Hardy.

He said the Lifeguard app has had more than 7,800 registered users since May 2020. Almost 83,000 sessions have been clocked. On average, a client uses the app about 10 times a month.

Getting To Know You: Alistair King, Co-Founder, NOOD

Getting To Know You: Alistair King, Co-Founder, NOOD